After a tragedy like the mass shooting in Orlando last week that claimed 50 lives, it’s easy to point the finger somewhere – anywhere – else. After mass shootings involving possibly radicalized Muslims, it’s easy to blame radical Islamism. After most mass shootings, we tend to fixate on mental illness as the culprit. Anything, so we don’t have to grapple with the way our attitudes and associations feed into a culture of violence and hate.

But after this shooting, which was the worst in American history and took place at a gay nightclub, it is time for Christians like me to admit our own guilt. I might not have pulled the trigger, but I am not blameless in this senseless and horrific act of violence. This is my confession.

As a member of the Church of the Brethren, I actively participate in an institution that insists that LGBTQ lives are less valuable than straight, cisgender lives. In practice, we denigrate the love that gay and lesbian brothers and sisters feel towards those of the same gender as abominable and sinful. It’s written into our Annual Conference policy: same-sex covenants are unacceptable (1983).

Is it really so shocking that a violent person would walk into a gay nightclub and murder fifty people, when institutions like the COB treat them like their lives and love are despicable and unclean? The Church of the Brethren may not be large, and we might not project anti-gay hostility like the Westboro Baptist Church does, but we must confess that we have contributed, if even in a small way, to a culture of hate towards LGBTQ people. And if such a culture did not exist, this shooting would not have happened.

The Orlando shooting should be a wake-up call, considering the sheer violence that took place. But we can’t forget that most violence against LGBTQ people isn’t so visible. In particular, anti-LGBTQ bullying and anti-gay messages drive many LGBTQ young people to harm themselves. The suicide rate for LGBTQ young people is between 30-40%, much higher than the suicide rate for other young people. In fact, suicide is the leading cause of death for LGBTQ people from ages 15-24.

Anti-LGBTQ violence isn’t just picking up a gun and storming a gay nightclub. Insisting that homosexuality is sinful and shameful is also violent. More violent, in fact, if we only go by how many people these messages kill and injure.

It’s hard to know exactly how many LGBT people are members of the Church of the Brethren. But statistics should tell us that there are at least 5,000 LGBT members of the COB. How many of them have considered self-harm because of something they heard in their congregation about homosexuality? How many have feared coming out of the closet because they know their family or church community won’t accept them? How many have left the COB entirely in search of a faith community that values and celebrates them? How many have been permanently spiritually scarred? How many people have we ripped away from ever knowing or loving God, because we refused to love them?

I know that some people will be offended by these words. It’s hard to hear that something you believe because of your faith is actually hateful and violent. It’s hard to accept that you have contributed to a culture of violence, or that you have personally hurt people spiritually, emotionally, and even physically. I know that these words are hard to hear, but I believe that they are true, and I offer them not to accuse or belittle anyone, but to offer an opportunity for dialogue, change, and spiritual growth.

And change has to start with me. So this is my confession: by being part of the Church of the Brethren, an anti-LGBTQ organization, I have contributed to a national culture of hate and violence against gay people, which has inspired hate crimes and has driven thousands of LGBTQ people to attempt suicide. I invite you to confess the same. And together, I call for us to move forward, boldly insisting that the COB change, demanding that we finally live up to Christ’s revelation in Matthew 25 that the love we show for those on the margins is the same love we show to Christ. 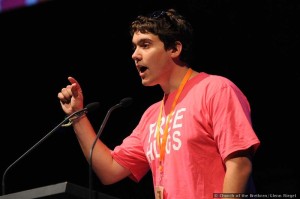 Emmett Eldred is a senior Creative Writing; Professional Writing; and Ethics, History, and Public Policy Major at Carnegie Mellon University. His passions include reading about, writing about, and snuggling with pugs. Emmett is the founder of DunkerPunks.com, and he wants lots more people to contribute! Fill out a Dunker Punks profile, and join the conversation! Follow Emmett on twitter @emmetteldred and follow Dunker Punks on Twitter @DunkerPunks and on Facebook.

One thought on “A Time for Confession After Orlando Shooting”