I was asked to shed a little more light on my comment about still being sore about the last Lent Madness competition, and so decided to make this article in Dunker Punks in History about my family’s namesake, St. Brigid of Kildare. (Also known as St. Brigit or St. Bride. Got to l 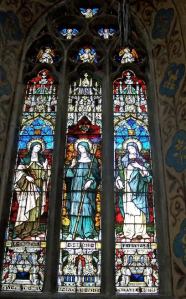 ove alternate spellings.) I first discovered her in middle school while trying to research what my last name meant. I had read that in Irish names Mc means son of, but I was confused as to why I would have an ancestor named Bride. In actuality, the name is a shortened form of the Irish Mac Giolla Brídhe, which means “Son of a servant of St. Brigid.” In short, one of my ancestors must have had a particularly strong devotion to St. Brigid, so that his family came to be known for it. After having learned about her life, I can see why.

Some people believe that St. Brigid never actually existed. She shares a name with a particularly popular Irish goddess who shared a couple of similar patronages and customs associated with the saint. Because of this some scholars have suggested that she is actually a Christianization of said goddess. While I’m not going to pretend that I am not biased, I disagree. While I would not be surprised to find that some of the legends and traditions associated with St. Brigid were original about the goddess, as a matter of fact I find that quite likely, I find it hard to believe that Irish Christians would have just taken a pagan goddesses and made her a saint. I believe that at least the core of the legends of St. Brigid are true.

While St. Brigid has many patronages, including everything from infants to scholars to breweries, she is probably best known as one of the three patron saints of Ireland, together with St. Columba and most famously, St. Patrick. Her feast day is February First.

I’m going to go on a tangent here as I believe I am writing for a mostly Brethren audience, and I’m not sure how much everybody knows about concepts of fest days and patron saints. I know that I didn’t know anything about them until I started studying other branches of Christianity a couple of years ago. A Saint’s feast day is a special day set aside by the church to remember that person’s witness and legacy in the church, similar to how in the secular world we have national holidays to celebrate national heroes. A few of these days have become secular holidays themselves, such as St. Patrick’s Day and St. Valentine’s Day. (Yes, Valentine’s Day was originally a religious holiday. And you though the commercialization of Christmas was bad.)

A patron saint is a saint who is believed to have a special affinity for a particular job, location, or type of people. People ask them to pray to God on their behalf, similar to you might ask a close friend or relative to pray for you. After all “the prayer of a righteous man [or woman] availeth much” (James 5:16), and how much more righteous can you get than someone who is already in heaven?

During the first couple rounds of Lent Madness (a spiritual version of March Madness run by a couple of Episcopal priests, but open to and featuring contestants from all branches of the Christian faith) The Rev. Megan Castellan posted these articles on the life of St. Brigid, which tell her story much better than I would be able to. I’ll include links to these and other posts about St. Brigid from the competition at the end of the article.

“Brigid was born into slavery in 453 CE in what is now known as Ireland. She was born out of wedlock to a Druid high priest named Dubhtacht and an enslaved woman named Brocca. Dubhtacht promptly sold Brigid off, since he was hoping for a boy.

This plan didn’t work; Brigid arrived back at her father’s house when she came of age — and had freshly converted to Christianity as well. (Saint Patrick was already active in Ireland by this point, so her conversion was not surprising, but it really annoyed her father).

What further irked her father was Brigid’s practice of giving away every single thing in his house to any impoverished person who asked. Food, clothing, silver — Brigid gave it away without a second thought in order to aid the poor who flocked to her generous spirit. When Brigid gave away his jewel-encrusted sword, her father reached the end of his rope and was determined to sell her to the king.

The king didn’t share Dubhtacht’s frustration — and as he was convinced that she was a holy person, the king promptly gave Brigid her freedom.

Brigid had one goal in mind. She marched across Ireland, from Leinster to Connaught, to find and buy her mother’s freedom. After this, Brigid became a nun, and established a monastery at Kildare, where she lived for the rest of her life.

The Kildare monastery was a double monastery —meaning men and women monastics lived together — and Brigid was the abbess over both houses. It was the first such establishment, but others soon followed throughout the Celtic countryside. As abbess, Brigid was sought out for her advice and counsel, and Kildare became a great cathedral city in Ireland and a center for the arts, learning, and spirituality.

Ever the consummate hostess, many of the miracles associated with Brigid had to do with food — especially dairy foods. Her cows were rumored to give milk three times a day. In one of the most mystical stories of Brigid’s life, we find her miraculously whisked through time and space to be the midwife to Mary and wet nurse to baby Jesus. It’s easy to see why Brigid is celebrated as the patron to both dairy farmers and lactating women.

Brigid was known for being wise and generous and good at explaining the gospel in the people’s language and culture. Legend has it that she went to visit a dying man who was out of his mind with fever. She sat beside him to console him, and as she sat, she started weaving together rushes from the floor into a cross shape. The man saw what she was doing and asked what the cross meant. She explained it, and the man was moved to ask for baptism. To this day, Saint Brigid’s cross is omnipresent in Ireland.

Brigid died at Kildare in 525 CE, but her life and her presence echo still across Ireland and throughout the world today.

Collect for Brigid of Kildare:

Everliving God, we rejoice today in the fellowship of your blessed servant Brigid, and we give you thanks for her life of devoted service. Inspire us with life and light, and give us perseverance to serve you all our days; through Jesus Christ our Lord, who with you and the Holy Spirit lives and reigns, one God, for ever and ever. Amen.

Brigid is the most beloved Irish saint, alongside Patrick, in the hearts of the Irish people.

Known as Mary of the Gael, she is said to have miraculous powers over beer: both changing a bathtub full of water to beer to feed a starving family, and causing a single barrel of her monastery’s brew to last from Christmas straight through to Pentecost.

However, she didn’t limit her exploits to mass beer production — Brigid was a shrewd leader as well. Her double monastery was the first of its kind. When she went to the king, to request land to build her abbey, she explained that she had just the right spot picked out: it had trees, access to water, good for building, a lovely view, etc. The king flatly refused. Undeterred, Brigid suggested the king give to her just enough land as her cloak covered. The king, eyeing the small garment wrapped around her shoulders, shrugged and agreed. Brigid spread out her cloak, handing each corner to a different nun, and they started walked in opposite directions. Suddenly, the cloak grew larger and larger, until the king, annoyed, threw up his hands, and gave her the original parcel she had wanted. The idea of Brigid’s cloak became very important, and to this day, a popular Irish blessing asks for St. Brigid to shelter you under her cloak.

On a slightly more practical note, when St. Mel of Armaugh performed her installation as abbess of Kildare, he reported seeing a column of fire descend from the heavens and alight upon Brigid’s head. This vision convinced him, on the spur of the moment to just go ahead and ordain her a bishop. (Columns of fire from heaven are not to be trifled with). Vision or no, Brigid is considered by many to be the first functioning female bishop and is depicted holding a bishop’s crozier in many icons.

Her ministry, in Kildare and beyond, was based on translating the incoming Christian faith into the language of the people’s traditional customs and practices, until it became something they could relate to.

The monastery at Kildare was founded on a site that had been traditionally used for Druid worship of a pagan goddess. Worship of this goddess involved the kindling and tending of an eternal flame. Once Brigid decided to set up her monastery there, she elected to continue to let the flame burn — only she explained it as the light of Christ, shining in the world and coming to Ireland to bring wisdom, peace, and justice. Each day, a different nun would tend the light, and on the 20th day, Brigid herself took a turn. So the flame burned continuously, as it had in pre-Christian days until Henry VIII destroyed the monasteries.

However, in 1993, the order Brigid founded relit the flame in Kildare, and it is again shining continuously as a beacon of Christ’s love in Ireland.”

St. Brigid reminds us of God’s love for all people, especially the poor, and witnesses to the important roles women have played in the church, even from its earliest beginnings. May her example lead us as we live out the calling of a Dunker Punk.

(P.S. Please leave a comment saying who you are and where you are from. I want to know how many people are reading this.)

(P.P.S. Feel free to help me in my campaign to get John Kline and Ted Studebaker on next year’s bracket.) 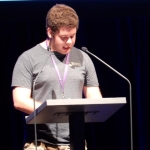 Nolan McBride is a History and Religion major at Manchester University. He loves music, theater, and learning about Christian traditions around the world. He enjoys swimming and singing and is still sore about his family’s namesake, St. Brigid of Kildare, losing to St. Francis of Assisi in the last Lent Madness competition. You can follow him on twitter at @nmcbride35, and find him on Facebook.

Want to contribute? Fill out a Dunker Punks profile, and/or send an email to dunkerpunks2014@gmail.com.

One thought on “A Namesake to be Proud Of”