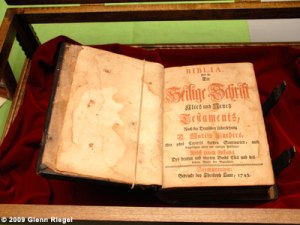 You may not have heard of these two early Brethren, but both distinguished themselves as Dunker Punks through their revolutionary commitment to nonviolent nonconformity.

Among the first members of the Church of the Brethren in the colonial United States, Christopher Sauer became a prominent printer to native Germans and other German speakers in the colonies. Among the works that he printed were radical condemnations of War and Slavery, becoming one of the first outspoken advocates of pacifism and abolition in the country. In 1758, Sauer was arrested for denouncing the militant activities of the British army during the French and Indian war, though he died before receiving any punishment.

His son, Christopher Sauer Jr., continued his father’s legacy, and did even more to promote the dunker punk ideals of nonviolence and nonconformity. Not only did he continue to promote the ideals of pacifism and abolition, but he did so during an incredibly volatile and formative time in American history.

Sauer was very active in promoting these ideals during the American Revolution. While many throughout the country were gripped by nationalistic fervor for the American cause of independence, Sauer Jr. stood resolute in his belief that even independence was not worth the cost of violent conflict. Refusing to conform to the militant nationalism sweeping the nation and his region in particular, Sauer remained committed to nonviolence.

In 1778, Sauer was labeled an “Enemy of the State” and was summoned to appear in court to take an oath of allegiance. He refused both summons. A few days later, Sauer was arrested by the military, where he was subjected to humiliation and near-torture. Still, he refused to take an oath of allegiance. The next day, he was marched to a military internment camp, where he was held for several days until he made an appeal to George Washington. Washington allowed Sauer to be released, but Sauer was exiled from his hometown of Germantown until the revolution was over. Again he disobeyed the State and returned to Germantown a few months later. Sauer was arrested, and while in custody he missed another summons to take an oath of allegiance to the United States. As punishment, all of Sauer’s possessions and property were auctioned off. Sauer, a considerably wealthy man, lived the rest of his life in extreme poverty. Through all of these circumstances, he never wavered from his conviction to nonviolence.

Both of the Sauers, and Sauer Jr. in particular, remind us that being a dunker punk is not supposed to be easy. Sticking to the nonconformity that a truly Christ-like life demands isn’t supposed to be fun. We maintain our radical obedience to Jesus and his ways of nonviolence and enemy-love because we are ambassadors of the Kingdom of Heaven, and here in the Kingdom of Heaven, we do things differently. We are called by Christ to promote and build his kingdom here on earth, and the only way we can do that is stay resolute in our commitment to walking a different path.

Let Sauer Jr. remind us that no matter how bad things get, what we are doing is meaningful and powerful. So stay strong. Keep the faith you have committed yourself to living. And allow this community to support you. The Church of the Brethren and the dunker punks stick together. Allow us to help one another. We are called by Christ to Journey along a different path, and Christ has blessed us with everything we need to make that Journey together.

Stay tuned for more Dunker Punks in history and their radical and obedient acts of love! Want to suggest an historic Dunker Punk? Contact the curators of dunkerpunks.com at dunkerpunks2014@gmail.com.

Have your own story of being a dunker punk? Want support, encouragement, and prayers? Want a community to keep you accountable? Let us know in the form below!